The Presidents Challenge is a group of four (4) competitions as follows.

Individual sheets for each competition will be posted in the next week or so.

Traditionally winners are announced at the Gem Show. In 2021 we may not have a Gem Show, but we can and should still have the Challenge.

I need some information from you so I can compile a list of workshop dates. Please send me the following as early as you can.

I urge you to enter, it could improve your skill level and hopefully you will enjoy the challenge.

by Ray Wilson for the Building Committee

About 3 years ago plans were formulated to improve safety around the soldering area, create a dedicated area for all of the hot working activities and consolidate the diamond saws into an area closer to the cabbing area and increase the power supply to 3 phase to ensure sustainable supply for the future.

In August 2019, the building committee started working on formal plans and drawings with a view to obtaining a grant to undertake the work.  In early December 2019 we were advised that we had been successful in getting a $32,000 grant from the Brisbane City Council under their Building Stronger Communities program.

The work commenced in early January with members assisting in clearing out the areas ready for the building contractor.  Around 20 members assisted in the project overall with clearing the site, painting, assembling furniture and re-establishing the work areas.  The final part of the construction work – installing 3 phase power – was completed last week.  There are still things to resolve and work out where they will finally be located ; like 24” saw and flat lap machines, but the majority of the project is now complete.

The collages below show the progress of the project with before, construction and fit out photos. 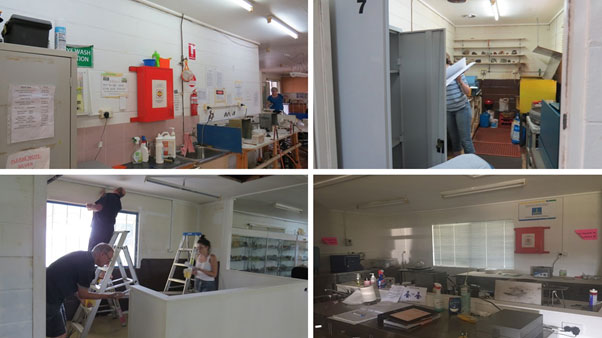 The removal of a wall has opened up the soldering area and now includes casting and enamelling equipment.  The main corridor through the building is now clear of naked flames making it a safer environment for members. 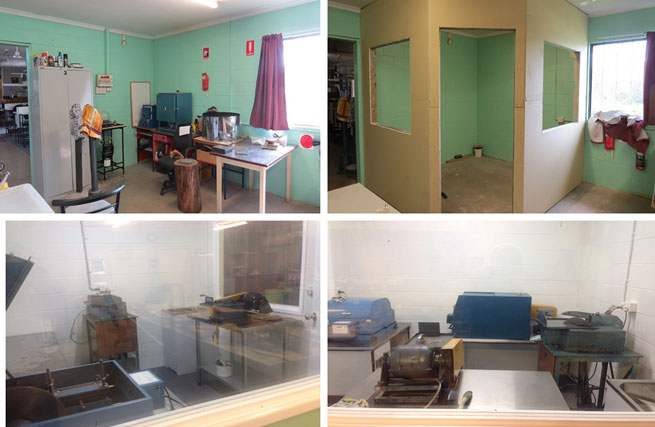 From a corner in the cabbing room a dedicated saw room has been constructed which now houses all 4 trim and slabbing saws.  This allows members who are using grinders to view the operation of the saws.  The volume of traffic  through the club has been reduced by having the saws proximate to the grinders.

We are appreciative of the support from the Brisbane City Council, our local Queensland government member and Patron Leanne Linard, our local BCC Ward Alderman Adam Allan and also of the many members who gave of their time to completing this project. 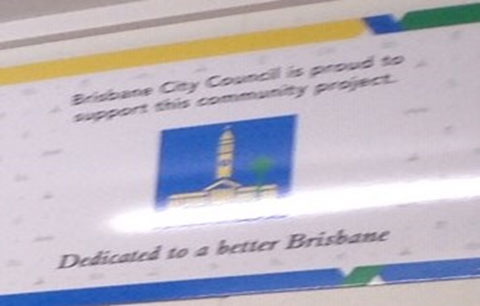 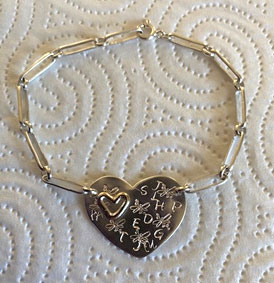 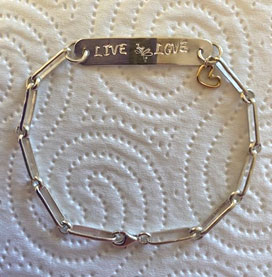 A lot of us have done broom casting at the club and I for one had a lot of fun. It’s so addictive, I think we have all done quite a few ‘pours’ and most of us have gotten some really good results. But what can you make from the end results?

I’ve made a couple of pendants (how many can one person wear though right!?!?), some earrings and STILL have some great looking broom castings left over.

The photo is of the same pendant, just showing different sides..... 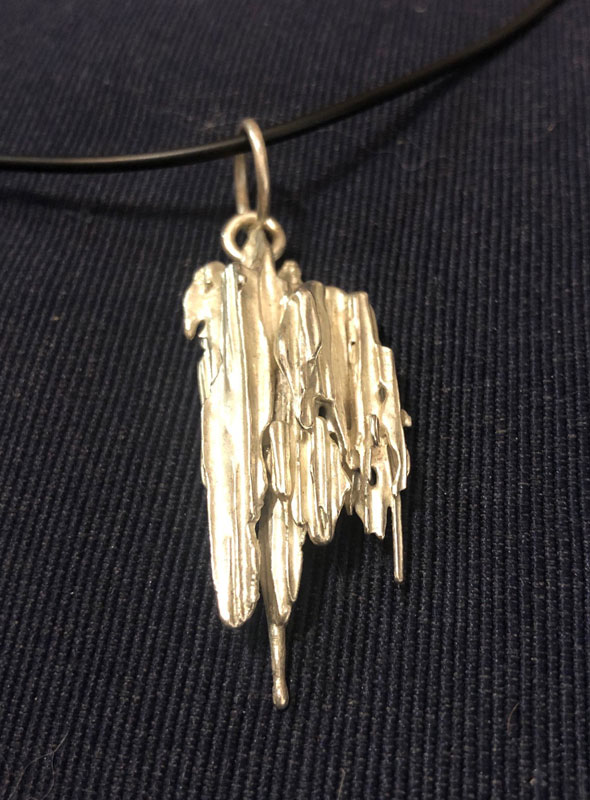 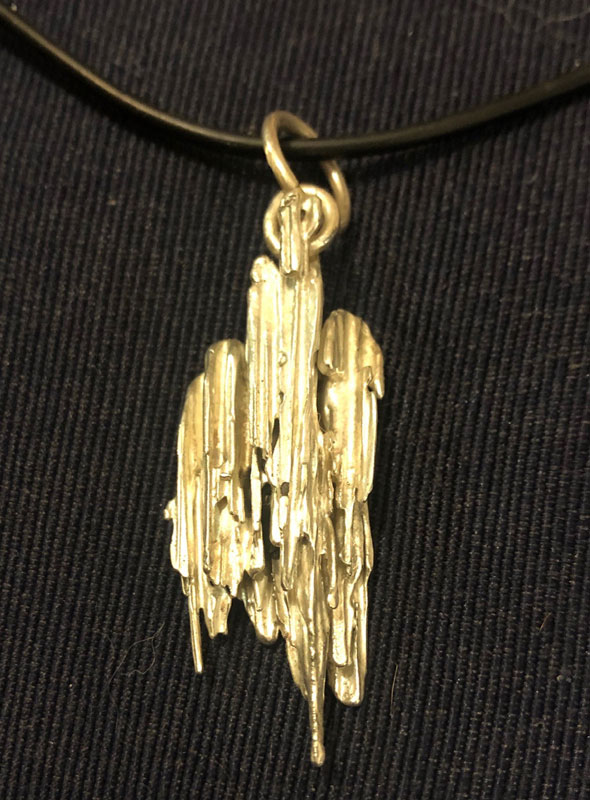 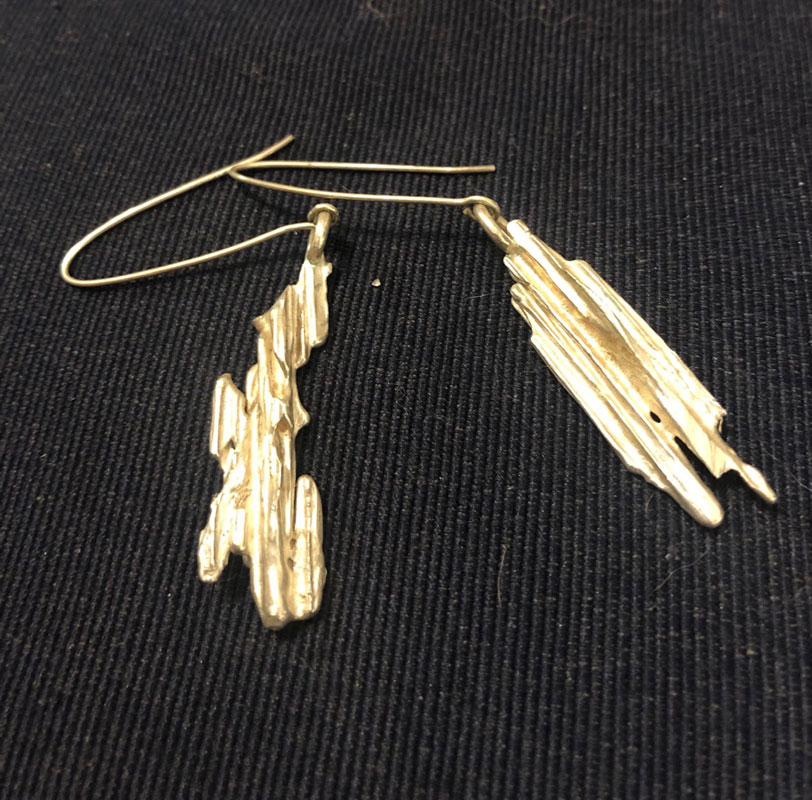 So I thought about what else I could make and one piece really lent itself to a ring.

First I made a plain, simple ring shank or band. Then annealed the casting piece. And VERY CAREFULLY bent it little by little into a crescent shape. Carefully, as I didn’t want to mar the silver or damage the design. Annealed several times while bending.

Once it was kind of the shape and size I wanted, I made the ring shank the same shape as the casting using pliers. Like matching a bezel to a stone. 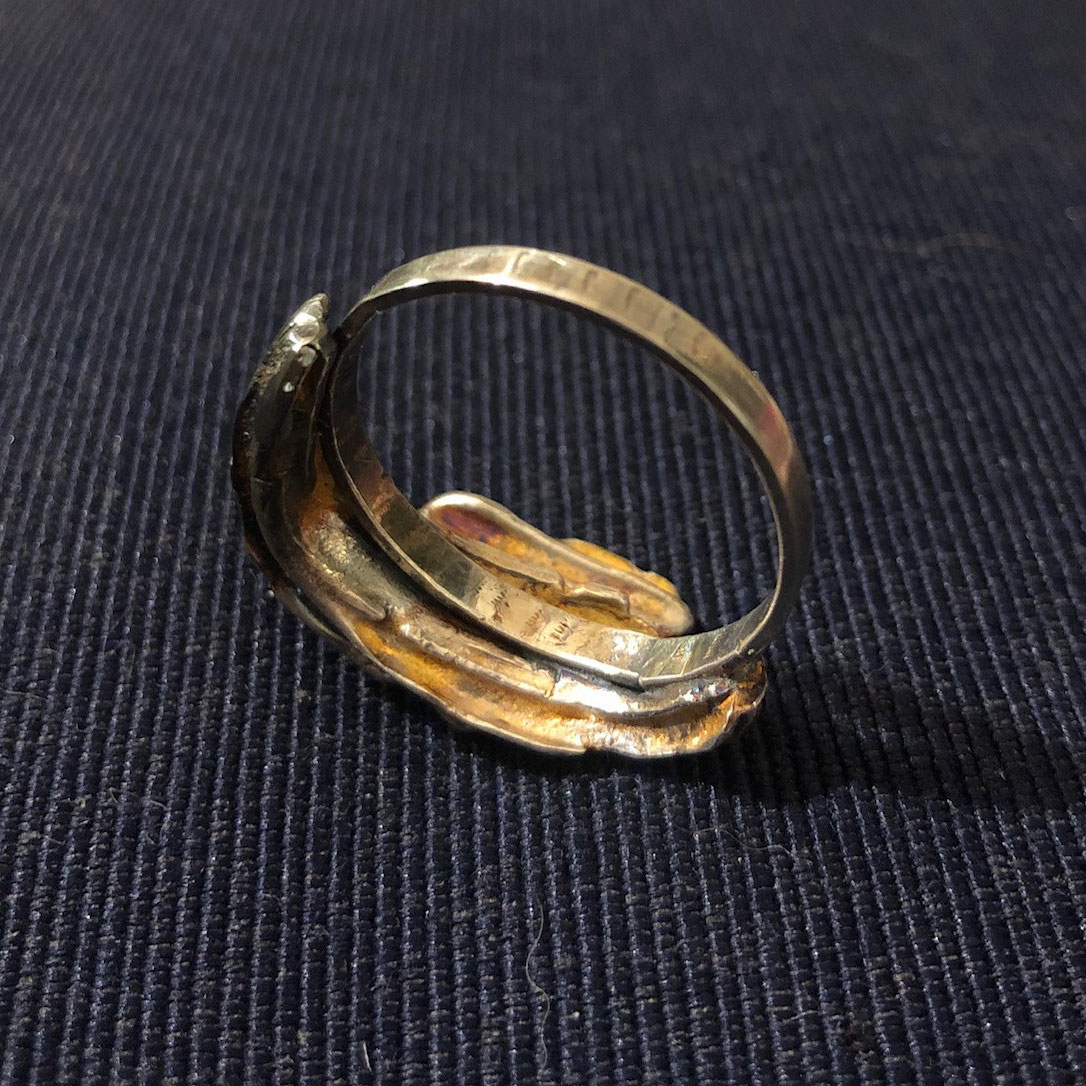 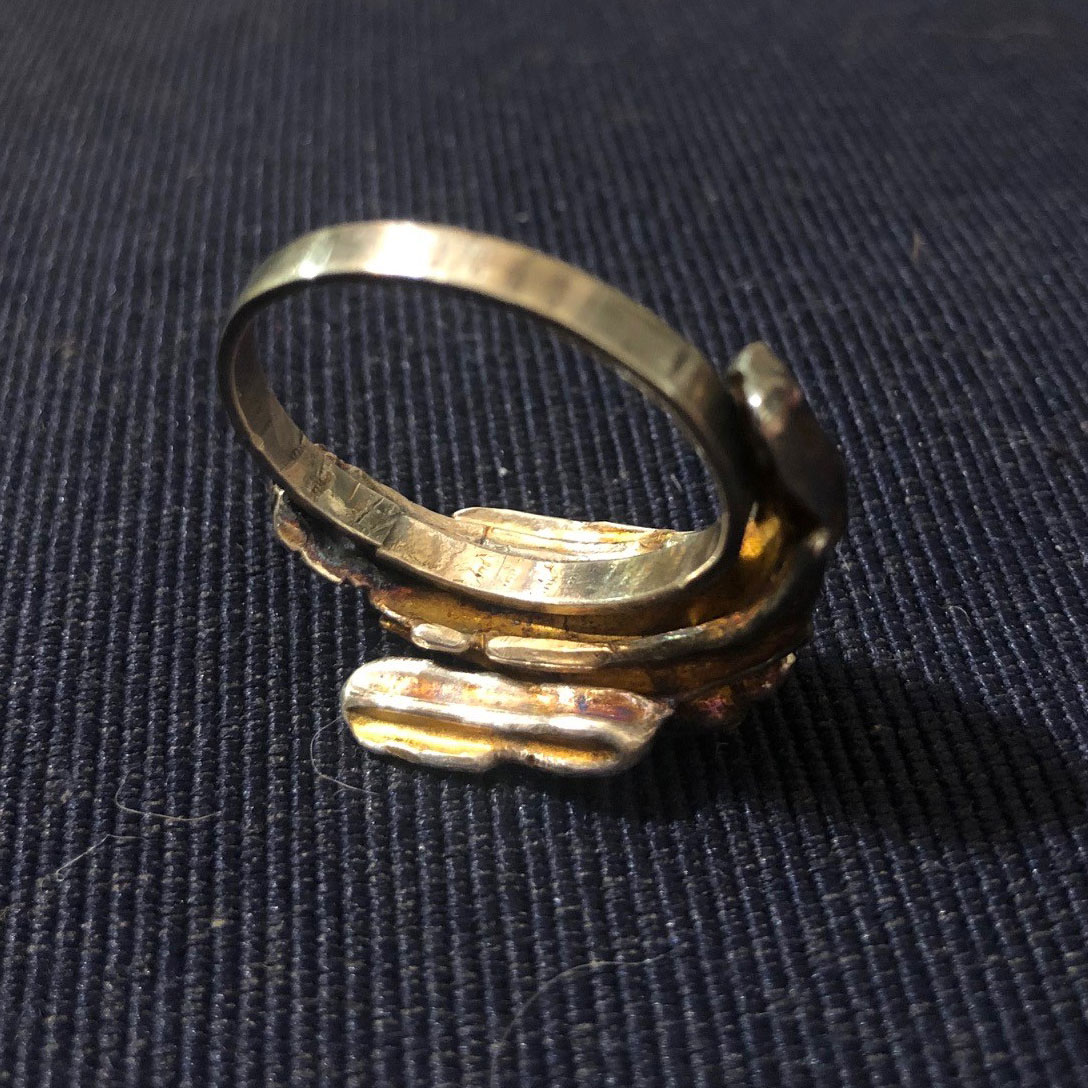 Then much to Carol M’s dismay, used a small butane torch to solder it together. She didn’t believe I could solder such a ‘large’ piece of silver with a small torch.

It’s kind of all about confidence and experience I guess.

As most of you know, I’m a patina girl. Love, love, love patinas.

And look what groovy colours I got! 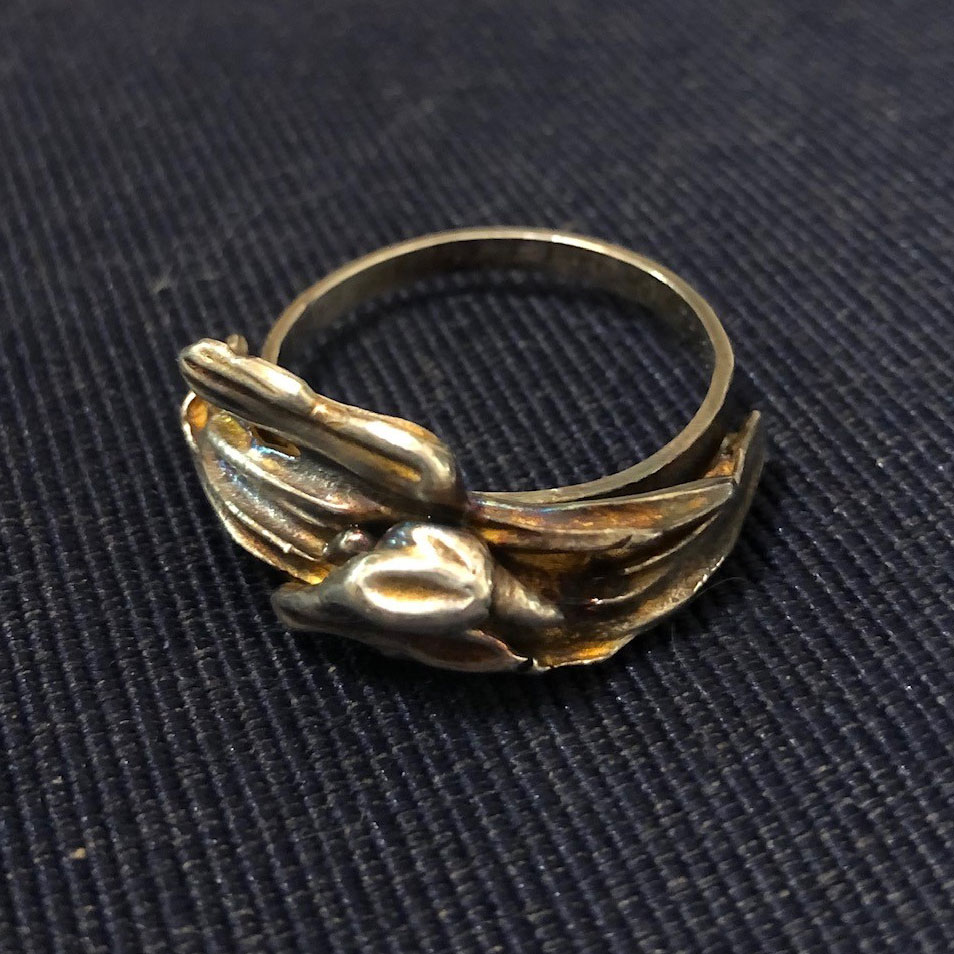 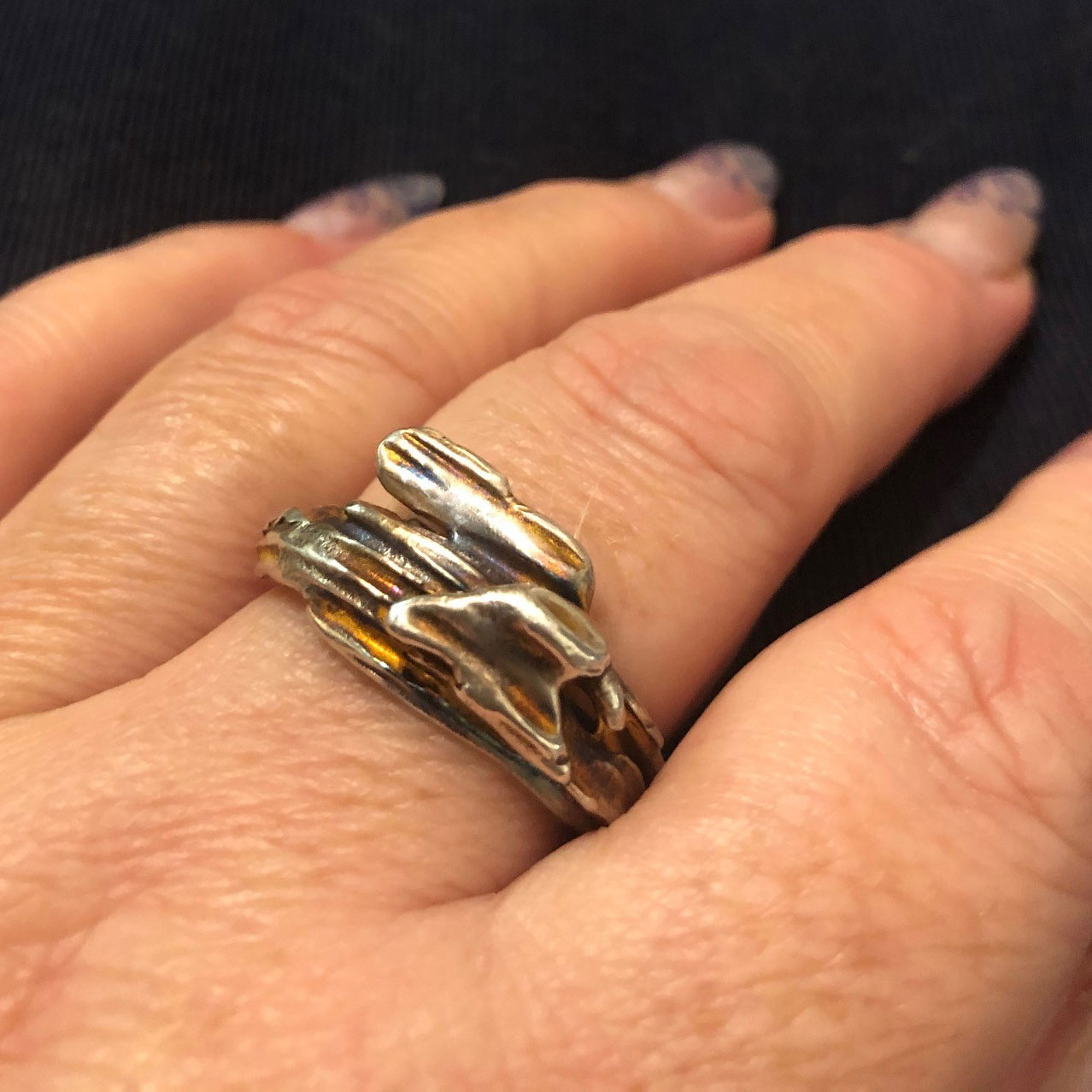 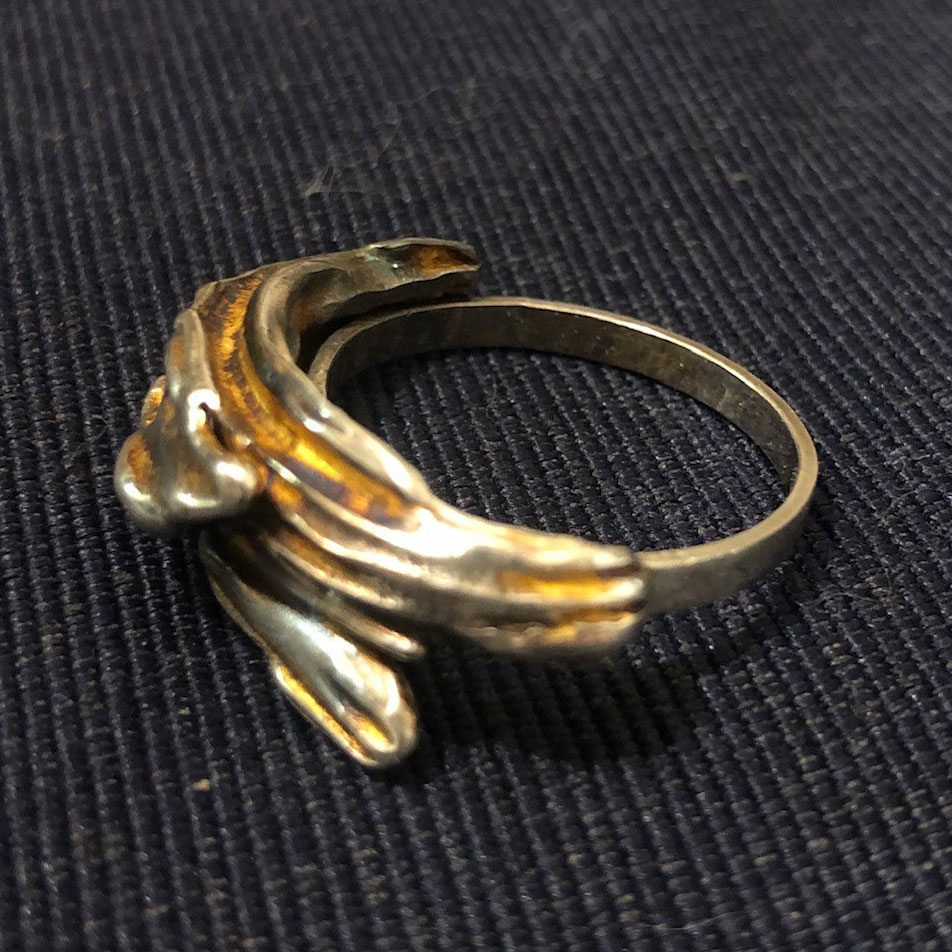 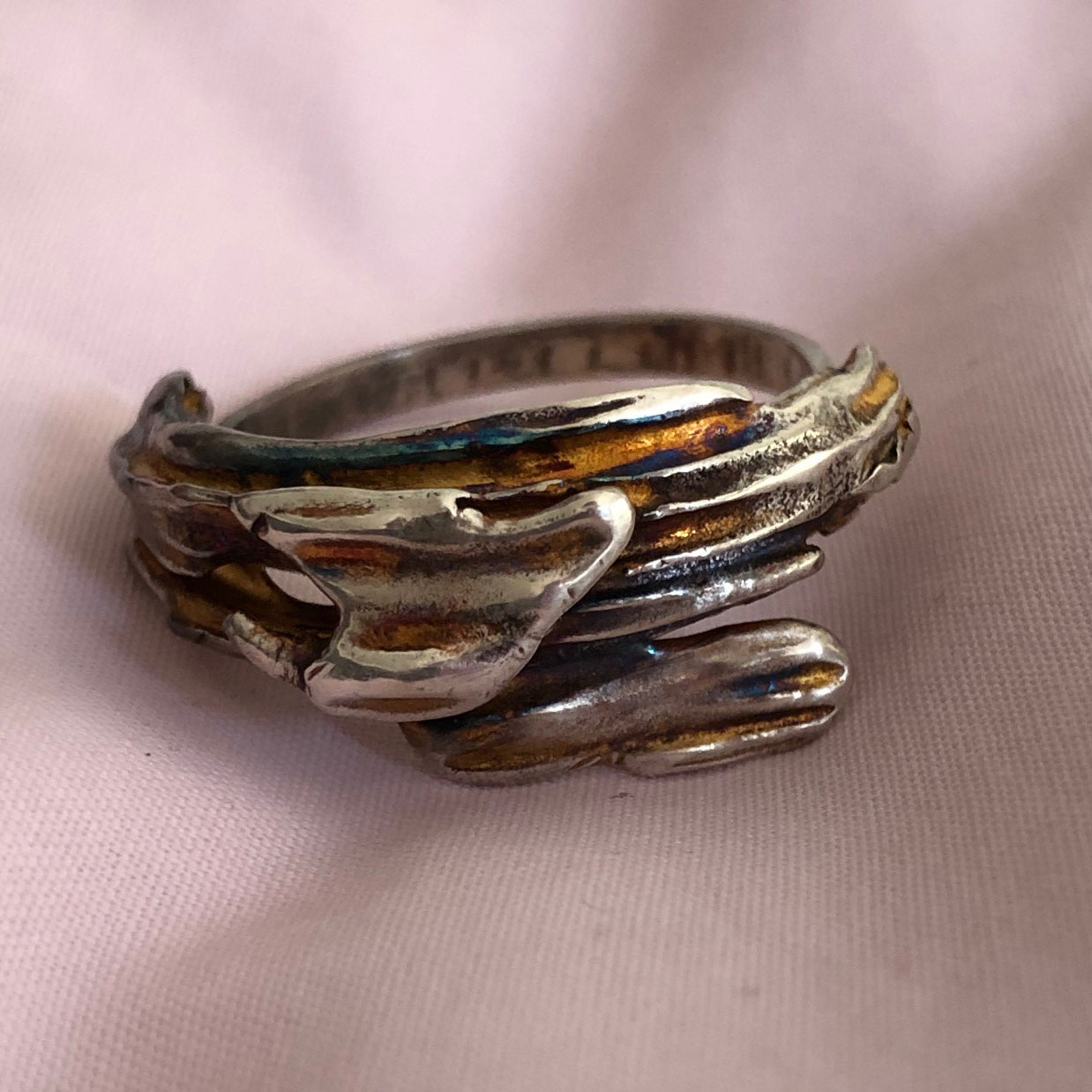 A necklace made using a variety of remnant links/jump rings. Somewhat eclectic! 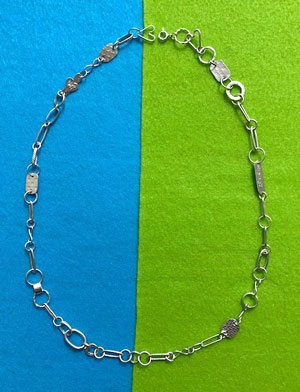 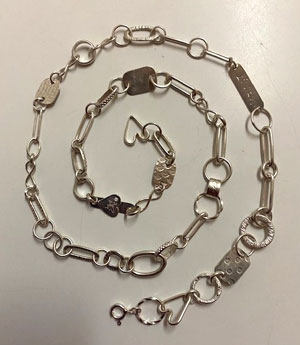 Mohs - Carl Friedrich Christian - was an old German fella, a geologist and mineralogist. He lived some time ago (1773 – 1839). You wonder why I mention Mohs? Well, he expanded on the knowledge from Theophrastus and Pliny the Elder who determined that Diamonds where pretty hard compared with other minerals such as Quartz.

Good old Carl used the knowledge from those who came before him and it became the basis of the hardness scale he developed, today known as Mohs’ Scale of (Mineral) Hardness.

When Mohs developed his hardness scale in 1812, very little information about mineral hardness was available. He simply selected ten minerals that varied in hardness and arbitrarily placed them on an integer scale from 1 to 10. It was a relative scale in which a mineral of unknown hardness could be tested against a group of ten index minerals to see where it positioned on the scale.

You most certainly have heard talk around the club house of how hard a piece of rock / mineral / gemstone is when people want to polish them.

The higher a mineral is on the scale, the harder it is to polish. And the reverse works of course too, the lower the ranking, the easier it is. Which of course means you could polish a low ranking mineral away to nothing in no time.

A good indicator to how hard a mineral might be is sawing a piece. The more the saw has to work, the harder it usually is.

But all in all, the scale doesn’t mean much. After all, what does it mean for example, that an Amethyst has the hardness 7 if you have nothing to compare it with? The numbers on the scale are just that, numbers.

So I have searched the net and asked my friend Google if there are any examples for the hardness. And as Google knows everything, it has delivered. The combined findings are in the table.

One of the comments that I remember is that Stones with hardness of under 4 may not polish at all or will only take a light shine. Most of the stones hobbyists polish are found in the 6 to 7 range.

As you will see in the table, many minerals don’t have a specific hardness but rather sit on a sliding scale, depending on the composition of the minerals.

And if you ever find yourself in Vienna, why not look for the memorial plaque in honour of Carl Mohs. 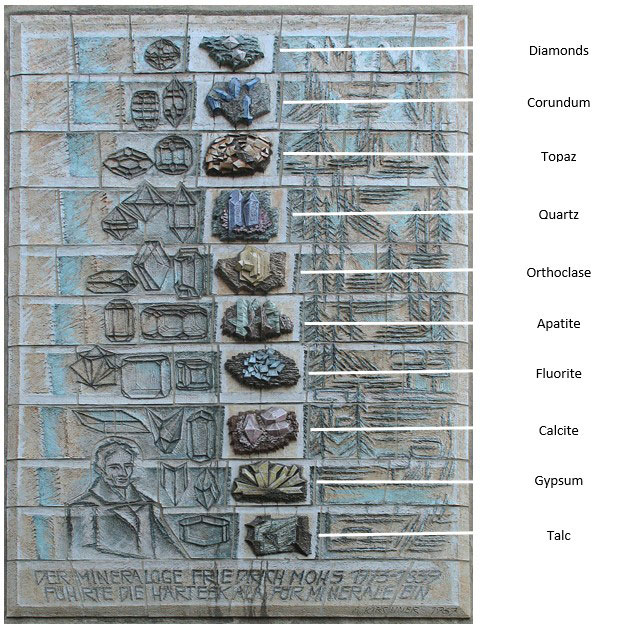 https://www.gemsociety.org/article/select-gems-ordered-mohs-hardness/ - here you will find a more complete list of minerals and there hardness according to Mohs

https://geology.com/minerals/mohs-hardness-scale.shtml - more in depth information. Including how to test minerals. 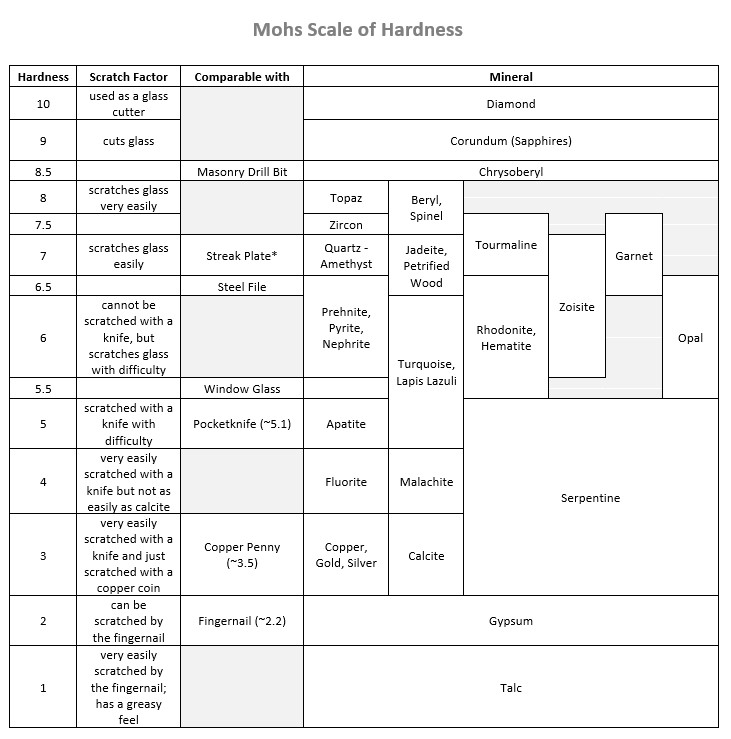 Not only has Lola been busy with her usual baking and jam making, below are some fine examples of her work in silver. 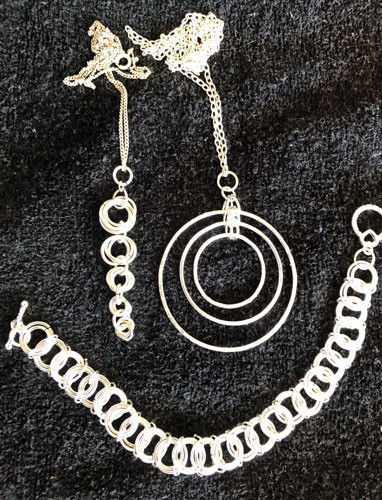 The pendant with the rings was made from recycled jewellery. 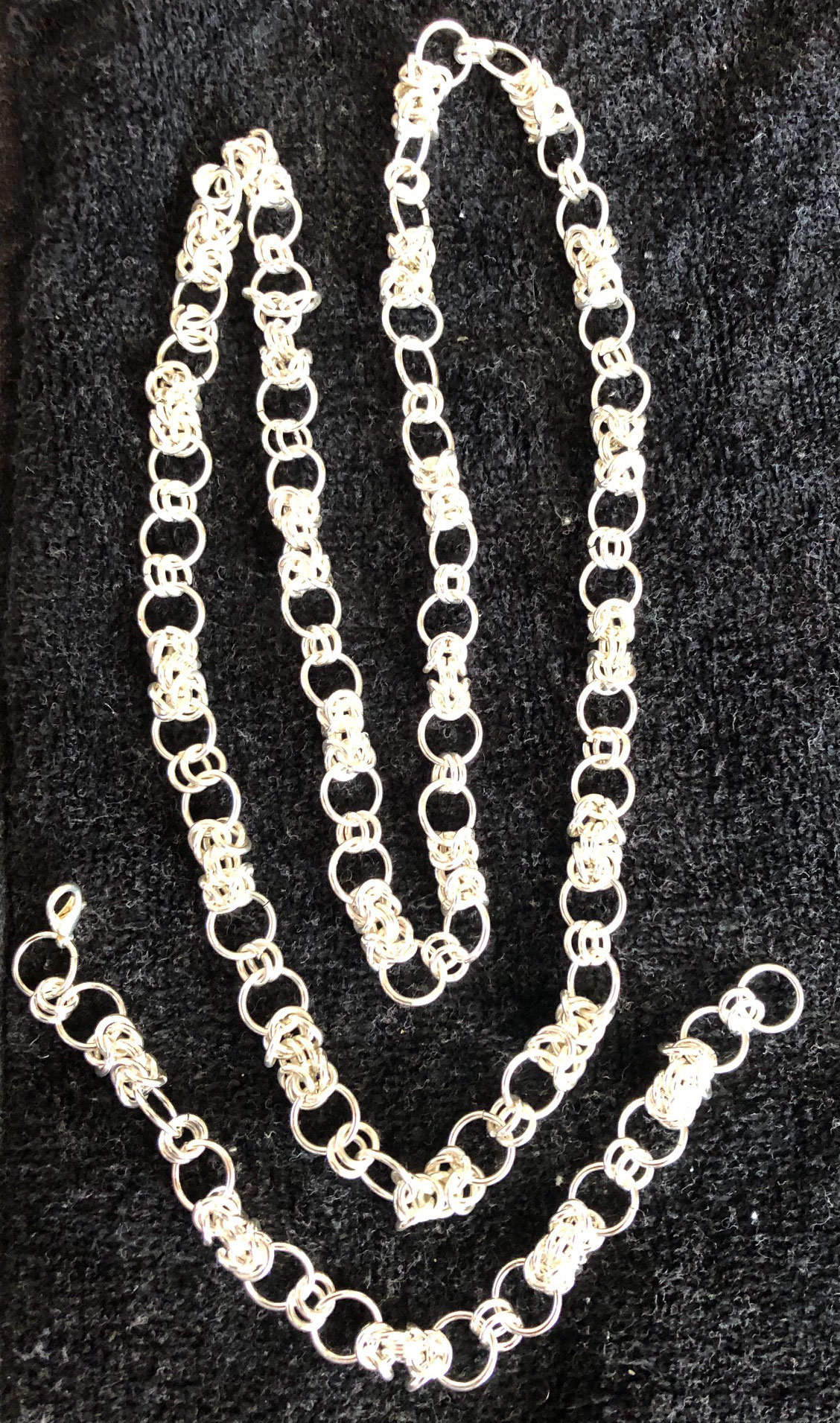 I have been dabbling with some cloisonne and transparent colours enamelling. The earrings are made from copper, with a layer of silver foil and several blended layers of translucent enamels. Ideally a kiln would have been used to fire the pieces but having to work with what I had at home, they were torch fired.

These ear-rings were made for another of my friends that has turned 60.  We met while dragon boat paddling, hence the dragon.

I know that one of the pieces should have been facing the other way (I was sure I had worked it out but it appears not!) 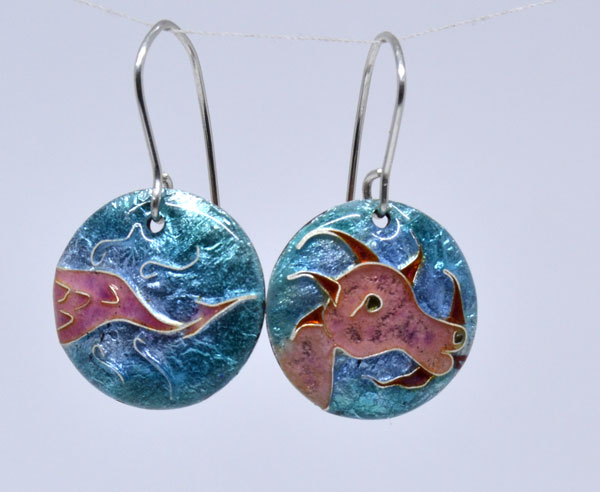 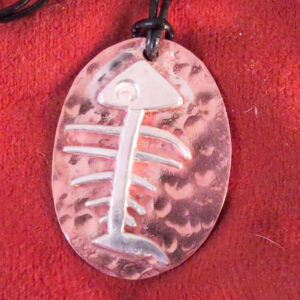 Sweat soldering is a simple process that can be used to create depth, texture or contrast to your work.

Solder is applied to the back of the piece that is going to be the top of the finished item. It is cleaned and positioned on the back plate and the complete piece is then reheated until the solder flows between the 2 pieces.  The surfaces of course have to be flat and free of grease.

Here's a piece I have just completed.